The Guatemalan Village School was the winner of the First Pan American Debate League, in a close finale with La Neurona Inquieta

The first edition of UNEATLANTICO‘s Pan American Debate League has its winner. This is the Village School team, representing Guatemala, which beat the La Neurona Intranquila team from the Boquete International Academy representing Panama in the grand finale.

The Jury that evaluated the performance of both teams was made up of three members whose experience and knowledge of public speaking and debate is based on extensive professional experience. Journalist Nieves Bolado, a doctor in Information Sciences with a forty-year career in the media; Antonio Urbano, a doctor in Psychology and Pedagogy and professor at the University of Oviedo, and Monica Bóbeda, who has extensive experience in multinational companies in the area of communication and sales, a public speaking coach in schools, companies, universities, and public agencies, all made the difficult decision to decide on the champion team.

The aspects evaluated to make the final decision were, in the first place, the capacity for verbal language expression through the initial speech, arguments for and against, rebuttals, inquiries, and conclusions. Secondly, body language, i.e. hand movement, facial and body gestures. And lastly, paraverbal language composed of diction, vocalization, speed and pauses. 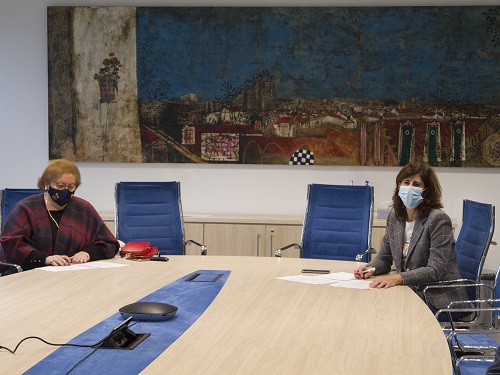 The tournament has been developed as an online format, with a total of seven countries having taken part, whose winners entered the final phase held throughout the week. The scores and deliberations by the Jury were held on the European University of the Atlantic’s campus.

The topic that every team discussed was “Do immigrants from countries in armed conflict deserve an assured welcome”, without knowing whether they should defend the position for or against the question until the last moment.

After the tournament, the Secretary General of the European University of the Atlantic, Roberto Ruiz, addressed the participants, expressing the institution’s gratitude toward the participating schools and teams, as well as the students’ involvement and praising the high level debating.

The competition has once again been organized by professors of UNEATLANTICO, Araceli Alonso, Inna Alexeeva and Manuel Rodriguez. Prior to the League, the students from the different schools also received a training course from oratory experts.