Dr. Juan Luis Martín represented UNEATLANTICO at the Lecture of Deans of Psychology of Spanish Universities

Dr. Juan Luis Martín, academic director of the Degree in Psychology of UNEATLANTICO, has participated in the annual lecture of Deans of Psychology of Spanish Universities (Decanos de Psicología de las Universidades Españolas, ‘CDPUE’ in Spanish) that has taken place at the Faculty of San Sebastian of the Universidad del País Vasco.

Throughout the sessions, the participants discussed the regulation of degrees and postgraduate studies, as well as the possibility of applying certain limitations on access to the career with the objective of appropriately absorbing graduates into the labor market.

Regarding the regulation of the degree, Juan Luis Martín said, “that we are working on each area, within Psychology, to have its own itinerary. It is already done in the health area, with the obligation to study the period of Resident Internal Psychologist (PIR in Spanish) and the master’s degree in General Health Psychology, which precisely began to be taught at the European University of the Atlantic.” 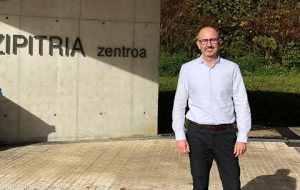 With respect to the regulation of postgraduate programs, the goal is also to provide more training to graduates and the possibility of implementing double postgraduate degrees is even being considered “and so this way professional interests in the field could narrow the training better,” said Martín. “It would be a way to combine, for example, neuropsychology with the health area, since, currently, the graduate has normally completed one of the two routes, but not the other.”

Among the aspects that aroused most interest within the participants of the Lecture of Deans of Psychology, highlights the fight against professional intrusion, since it has been detected the presence of people without precise training in some health areas. This would be a case to a certain extent, habitual in positions such as that of educational counselor. “To avoid this,” Dr. Martín proposes, “we must go back to regulation.”